We surrender ourselves to the streets of Istanbul with Burak Deniz. Instead of the familiar Bosphorus view and the sea smell, we are in search of stories stuck in dusty roads, centuries-old faces, teenagers entering Internet cafés, and most of all, sincerity. We know that Istanbul has many faces and we are after those who succeed to remain original. We’re lucky and stronger now that we have someone who lives his life pursuing reality.

One of the most impressive things about Burak Deniz is his time-defying awareness! But we need to look at it from the other side. He explains the popular figure he’s become from someone who remains away from pop-culture by saying, When you choose something, you have to give up on something else,”and adds, “Life has offered me some choices. I made some right and some wrong evaluations, and here I am. I accepted this fact when I chose this job. Otherwise I’d have to leave everything and go. I cannot continue doing this if I keep complaining about it.” While it is still discussed – and most rejected – whether acting is about the people, Burak Deniz can be so realistic as to say, You can’t always have what you want!”

As people continue to discuss if acting is about training or chance, those who manage to focus on their work are able to move forward. With a great focus on his career, Burak Deniz has been on TV for over seven years, and he improves himself by expanding his borders. As actors adopt the industry through various aspects such as screenwriting, producing and directing, when I ask about his tendency in this regard he emphasizes that “acting has more room for improvement,” and adds, “If a director screws up his first movie, then the audience will hardly give a second change when he makes a new one. On the other hand, they could also say he’s gotten better at it. If a screenwriter gets unlucky the first time, he may not even have a second chance. That’s why writing and directing require a greater effort. First, I need to take care of my acting. I haven’t yet felt the satisfaction in this field but I hope I will. If that inspiration comes, I’d love to say ‘Yes, I have this talent and should start writing.’ I don’t feel that now and I’m not curious about it because I still feel as if I could go deeper in acting.” Instead of letting himself go with the wind, Burak Deniz firmly puts his feet on the ground. When we ask how he imagines the next step in his career, he says, “There isn’t a character I wish to play; this is where time has brought me. I played in seven or eight TV series, and I had to work for them all the time which gave me enough time to play in only one movie.” The movie “Arada,” in which he shares the lead with Büşra Develi, was recently premiered at !f Istanbul. “I believe cinema has more quality to it. The timeline is wider and there is less intervention in terms of acting. I’d love to act in a very well-written film.” As he talks, you feel as if he is ready to do justice to a good story.

A masterful serial killer, a homosexual, a
character in depression, someone who has
lost all his family in an earthquake…”

He’s ready to follow a character with depth. Theater, which he still has not explored, is another aspect of acting that makes his heart beat faster. 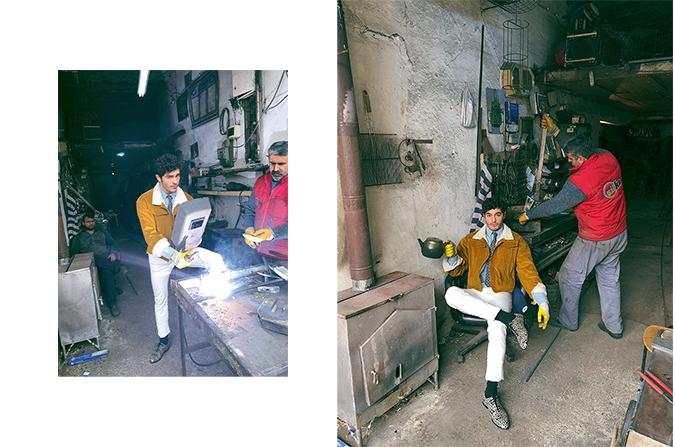 In the movie “Arada,” he plays a character who is passionate about punk music and considers the idea of “leaving this country to make the music he loves. As most of us think about whether “to stay or go,” the inevitable question follows: “To what extent does leaving have a place in your professional dreams?” Burak Deniz does not see this as a matter of “should.” “I don’t have that on my to-do list. I don’t feel like I should leave but yes, I’d like to be a part of the independent European cinema. Or who can deny a project from Hollywood? Everyone would love to be a part of an international project.” Though for now he says, “Let’s take care of it here first, then we’ll go abroad. There’s still time for that,” we are very sure that Burak Deniz will soon be a part of the indie movie industry he dreams of.

Today is filled with Istanbul, each moment we find ourselves questioning the place we live and asking “How would you describe Istanbul to someone who’s never been here?” “I’d say that it’s a very emotional, and personal city. The people of Istanbul perceive everything in a very personal way. It’s also very historical. Many has left their traces here and many others have come. Istanbul thrills me a lot and I’m sure it thrills every visitor. I see how many streets and districts I’ve never been even when I walk through the same neighborhood. I wonder how many others are there I have not seen yet.

It feels like a very implicit cit y. It feels more pleasant and curious to look
beneath the surface. People here are interactingand separate, different and identical all at the same time. It harbors many feelings; very satisfying and colorful.”Burak Deniz’s Istanbul is polyphonic, unique and mysterious. “Some say that it’s ruthless. What do you say?” I ask him and he replies, “Istanbul? Why would Istanbul be ruthless?

I think life is ruthless, and people kind of go along with it. I’m not talking about those pieces of garbage who kick dogs, beat women and throw their babies onto the street. As I said, Istanbul remains where it is, shiny and bright. It’s the situation that is ruthless, and we cannot blame the city for it.” We ask him how he preserves himself when everything is so soiled. “If I understand the question correctly, I must say I can’t. I can’t sleep feeling safe. Don’t watch the news, don’t read the papers, don’t look, don’t see – but what else is there? Are you going to live like a seagull? Indeed, seagulls even have their fair share of misery in Istanbul. 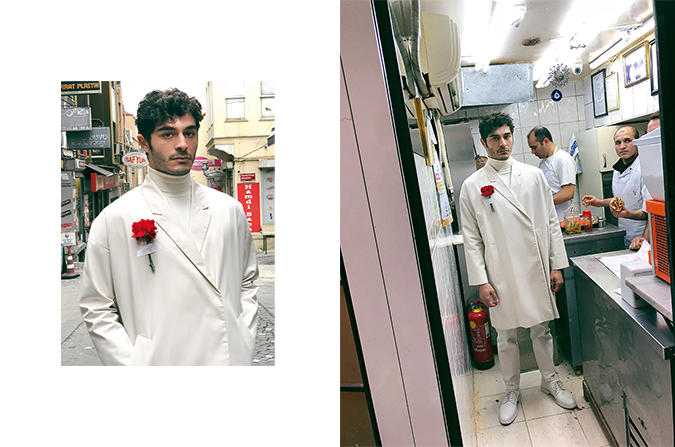 We live in so wonderful a country that we should not env y others. We should not be confused with artificial things. We act as if we have no idea what we would do if we didn’t have these concerns. It’d be great to be concerned just about ourselves instead of others. Then we would stop thinking about who wore what, or what happened. Just enjoy life as long as life and your body enable you! It’s not about how much money you earn. Yes, you cannot choose your family, your life, your house, where you are born or even what you wear. Sometimes you just have to accept it. But life cannot be something limited by where you’re born no matter how unjust it is.” 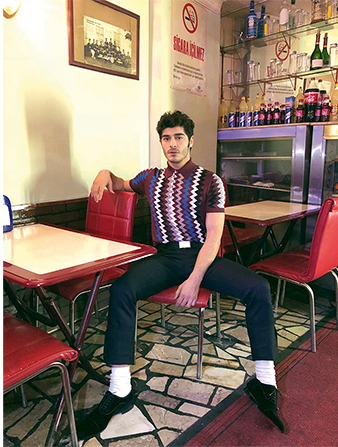 Of course, you cannot be happy 24 hours a day but Burak Deniz isn’t talking about a fascism of happiness” either and just says we should be happy with some things. It all goes back to where we started. You asked me how Istanbul makes me feel. It makes me look for solutions and say things like this. Istanbul is a beautiful cit y and it stays where it is.” He thinks that we are what makes that brick wall or place meaningful, and summarizes everything else as “masochism.”

Share:
Author: Based Istanbul
Simbart Projects Presents: “Barrack” by Didem Erbaş
Discover
You Can Evolve Unless You Change: Deniz Marşan